The controversy over the reduction in the flow of drinking water in the city of El-Aaiun is intensifying between the National Electricity and Water Office and the head of the group, Hamdi Ould Errachid.

The controversy can be summed up in two messages issued by the leader of the group, among them the concern of their interests for cutting off the water supply to the neighborhoods of El Aaiun. The official website of the El-Aaiun group published a statement explaining the messages sent by the head of the group to the regional head of the water sector in the El-Aaiun-Sakia El-Hamra region.

The announcement reveals that Ould Errachid sent two messages, the first on May 24 and the second on July 19 of this year, explaining the group’s desire to carry out local services, and describing the situation in which the inhabitants of the city in the distribution and scarcity of drinking water. 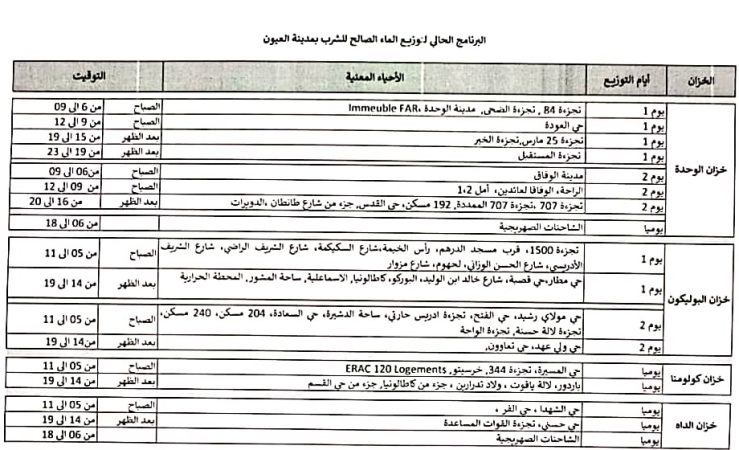 It should be noted that the city of El-Ayoun has the services of a single seawater desalination plant completed in 1995, 23 km from the city, pending the start of construction of the new station, whose inauguration was scheduled for 3 years.

The general director of the National Office of Electricity and Drinking Water, Abdel Rahim Al-Hafidi, had stated a year ago that this new plant will be exploited before the end of 2021 and will allow the total production capacity of drinking water to be increased. water to 60,000 cubic meters per day Meet the drinking water needs of the inhabitants of the cities of El-Ayoun, El-Marsa, Foum El-Oued and Taruma until after 2035.