More than two weeks after the disclosure of the new regulation of the management of the Raja Sports Club, which bears the name of the Moroccan representative Saad Al-Tsouli as the official spokesperson for the team, the artist Fatima Khair congratulated her husband on his new position.

Fatima Khair revealed a photo of her husband, Saad Al-Tasouli, while giving a speech to the club’s managers, commenting on it:Congratulations on your appointment as official spokesperson for the Raja Sports Club, good luck, God willing.”

For her part, the artist, Hanan Al-Fadhili, congratulated her colleague Saad Al-Tawli on his new position, commenting on Fatima Khair’s publication, where she wrote: “Congratulations, my brother, for success, God willing” . 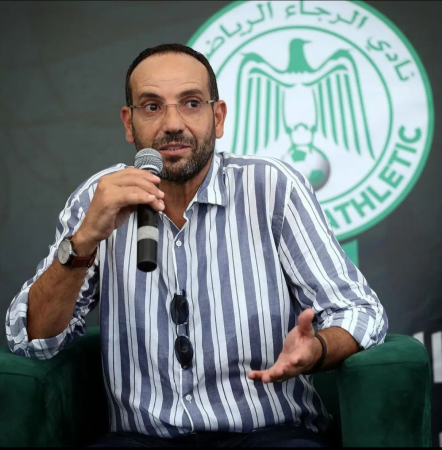 It is noteworthy that the Moroccan artist Saad Al-Tasouli entered the world of football, as he was appointed as the official spokesman for the management office of the Raja sports team, by the boss of the green team, Aziz Al-Badrawi, last July. 13

Al-Tasouli published on his official “Instagram” page the new list of the Raja team directors office under the chairmanship of Aziz Al-Badrawi, which includes his photo and his name as the new official spokesperson for the team.