Last month was one of the world’s hottest Julys on record, according to the Geneva-based United Nations World Meteorological Organization.

“The world just had one of the three hottest Julys on record,” WHO spokeswoman Claire Nullis told a news conference. And of course, as we all know, a very intense and prolonged heat wave has hit parts of Europe.”

In a statement, the organization, citing data from Copernicus on climate change, explained that last month was slightly cooler than July 2019, but warmer than July 2016. 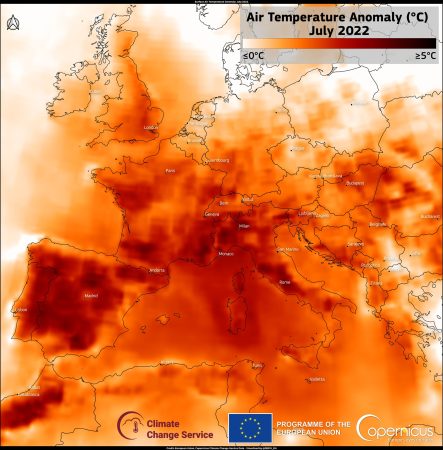 “The difference between these three months was very small,” Nullis noted, and “the difference was less than the margin of error.”

This occurred despite the presence of a natural La Niña phenomenon which, according to the World Meteorological Organization, “is supposed to have a cooling effect”.

Last month, the organization called on leaders to “be mindful” of the problem behind heat waves like those hitting Europe today, and which may become more frequent due to climate change until at least 2060.

The World Meteorological Organization noted that the month of July 2022 did not peak; Some regions of the world have seen below-average temperatures in the western Indian Ocean, from the Horn of Africa to southern India, across much of Central Asia, and also across much of Australia.

In addition to the heat wave, some parts of the world are experiencing severe drought. According to the World Meteorological Organization, July was drier than average across most of Europe, most of North America, much of South America, Central Asia and Australia. .

On the other hand, wetter-than-average weather was recorded in eastern Russia, northern China, and a large area stretching from eastern Africa to northwestern India through Asia.