The floods and torrential rains that recently hit most of Sudan’s states have left thousands of families homeless, with their homes and facilities destroyed as the state failed to provide shelter, food and medicine to those affected.
Sudan has witnessed heavy rains since August 12, which turned into torrents, floods and large pools of water, causing the destruction of infrastructure, the collapse of homes, public and private facilities, agricultural land and crops, and the transportation interruption.
According to reports, more than 10,000 families live in difficult humanitarian and health conditions, homeless, lying on the ground and covering the sky, in the north, center and east of the country.
Until Friday, the number of victims reached about 80 dead, not counting wounded, injured and missing, in addition to the destruction of nearly 40,000 homes, totally or partially, and the displacement of some 150,000 people.
The floods included the Nile river states, North Kordofan, Sennar, Gezira, White Nile, Kassala and Gedaref.
In central Sudan, heavy rains caused severe damage, as well as destroying several villages.
According to the United Nations Office for the Coordination of Humanitarian Affairs (OCHA), some 38,000 people across Sudan have been affected by the rains since the start of the season. According to the same report, the state of Central Darfur is the most affected.
And (OCHA) said that compared to the same period in 2021, the number of affected residents and businesses doubled this year 2022.
A statement issued by the Civil Defense last Tuesday indicated that 12,551 homes were completely demolished and 20,751 partially destroyed.
In addition, several states in Sudan annually suffer from the devastating floods that hit the country during the months of May, August and September, leaving victims in lives and properties. 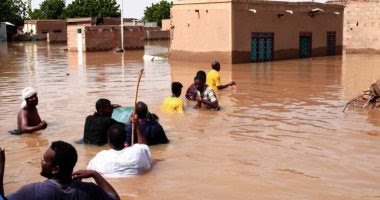