Dozens of notables from the Ait Lahcen tribe, in Guelmim districts, took to the streets on Sunday in a protest in response to what they called “unfair administrative division against them and the residents of the Ras al-Mail group.”

A statement announced by the protesters after the end of the vigil, and my father received a copy today, the 24th, read: “The Ait Lahcen tribes and those with them from the tribes in solidarity with them, categorically reject what they called the expropriation of the coastline of the Ras Umlil community, and condemn the efforts of the parties to tram the land of the desert tribes from the Wadnoun area to Wadi Ad-Dahab via the Saqia al-Hamra valley, thereby rejecting the new territorial division that deprived the Ras al-Amil community of their lands and distributed them in favor of other groups without any consideration of the tribal administrative division contained in the 1936 document that includes all the notables and sheikhs of the tribes.

The demonstrators demanded the need to reverse the decision of the new administrative division, which ended the territorial influence of the Ras al-Amil group, and the return of the eastern and coastal side to its current and natural place, out of respect for the borders. drawn between tribes that respect each other and are united by ties of love and brotherhood. 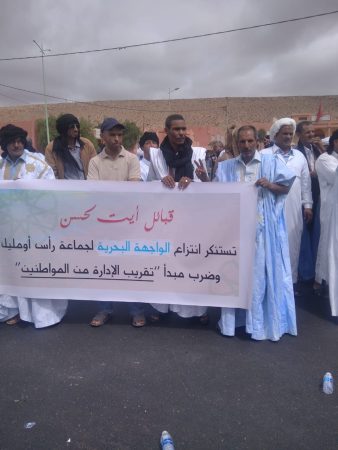