A wide controversy accompanied the circulation of a written correspondence addressed by the commander of the Belfa directorate, Bashtouka Ait Baha, to the director of a primary school with his dirty influence, through which he urged him to enroll all the students who met with the conditions running. of the principle of equal opportunities, where the administrative leader received a complaint and grievance from the parents and guardians of the students accusing the director of the institution Using partisan backgrounds to enroll primary school students in their school and systematically exclude their children for reasons political leanings.

This controversy created a difference in attitudes between rejecting the intervention of the leader to order the director to correct his administrative errors, and defending the leader on the pretext of his desire for families to benefit from educating their children in primary education without the need for to embrace any policy. or partisan background.

The director of the Tassbit school group, in the Belfaa group, Bashtouka Ait Baha, had received a letter from the commander of the directorate, in which he identified what he called the record of violations by the complainants, represented in the way that his The educational administration prepared the list of those enrolled in primary education for the current season, who considered that “the director based himself on enrolling the students of the basic education unit in a list prepared by one of the political actors of the region, based on their political affiliations. .

According to the sources, the leader chose to direct his correspondence to the director with a copy of the correspondence sent to the employment interests of Ashtoka Ait Baha after several incoming complaints were registered in his administration on the matter and the families of the children were left. excluded from the registry. They insisted on protesting against the institution, which threatens social peace in the region.

The same source believes that this was what motivated the commander to ask the director to enroll the children without selectivity and regardless of any political dispute, with the need to deliver the list of primary school enrollments, showing their ages and the conditions in which they are found. have been approved for this.

The two union frameworks indicated that the correspondence was “abandoned with the literature of external administrative correspondence”, denouncing what they considered “the interference of the leader in the powers of the director of the institution subject to the authority of the direct president, represented by the regional president ”. director of the Ministry of National Education, Initial Education and Sports only in the region”.

The statement added: “The accusations directed at the director by the leader were based on malicious, false and malicious rumors without investigating and ascertaining their validity, with an emphasis on not investigating the truth and relying on unilateral and politically neutral sources.” 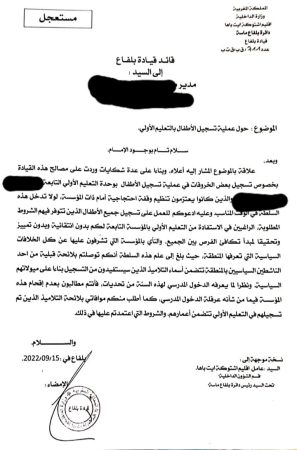