Two members of the Barkan Community Council opted for illegal immigration to the Netherlands, taking advantage of a visit organized by the head of the community to this European country.

He is related to Mustafa Al-Sabbani and Abdel-Ghani Kelly, the two council members who, just after the official visit of the Berkane delegation, decided to stay and refused to return to Morocco.

Al-Sabbani wrote on his Facebook account: “We believed in the motherland and we believed in participation…so we seek justice…and find injustice, then we seek salvation with free people and find restrictions… “.

And he added: “We discovered that everyone looks for their own interests and sees in the young and simple a ladder to climb. We had no choice but to seek freedom and justice outside the homeland.”

The elected delegation came to the Netherlands, as part of a twinning between Berkane and the Dutch city of Zeist. 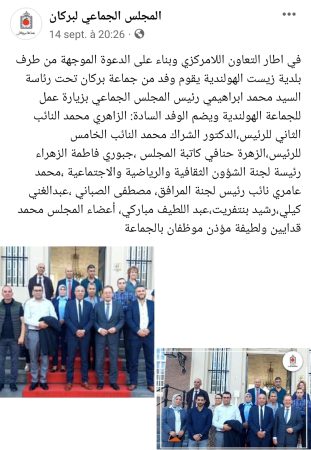 The two candidates, who were clandestine immigrants, belonged to the Justice and Development Party, before running for the last elections on behalf of the National Association of Independents.